This week theme from Blog English Club is Children Games. I have once made a post in Indonesian about my childhood games, Bermain di Alam.

My family used to live in small cities around the country. One of them was a small city in Langkat regency, North Sumatera. The surrounding was formerly a hilly rubber plantation. There were still rubber trees and in some part also you could find cashew nut trees. I loved to play outdoors after school time with my neighbors. We would ran to the small valley at the back of the houses. We loved to collect the gum from the rubber trees by made a cut on the bark. We applied the fluidy gum on the inside of the forearm. After a moment it would dry and could be rolled and formed like a ball. We also played hide and seek there, or swinged like Tarzan, collected forest fruits, caught eels, etc.

Compared to the children games nowadays, I must admit many things have changed. Game world now is influenced by the improvement of technology and kids prefer to do indoor activities.

I can not merely blame on the technology, or parents who prefer let their children stay at home to play outside. Many reasons to ban play outside, such as the security and the safety beyond parents’s eyes, the traffic on the street, lack of public gardens, the long hour school time and the news of some criminal cases.

Children now play virtual game with their gadgets or just watch television. The “creative people” make toys inspired by TV series, the toys that I do not think are proper and safe for children. For instance this dentures with their long canines imitate the werewolves from TV series Ganteng Ganteng Serigala. 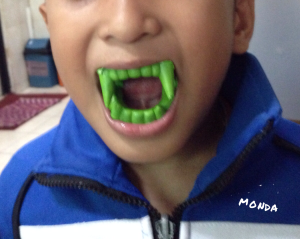 In my surroundings I still can see children play outside with the presence of adults accompanying them. I can see they still ride their bicycles or playing badmintons with grandmothers or mbaks. Parents now also likes to bring their kids to malls to play in the playground supervised by professionals.